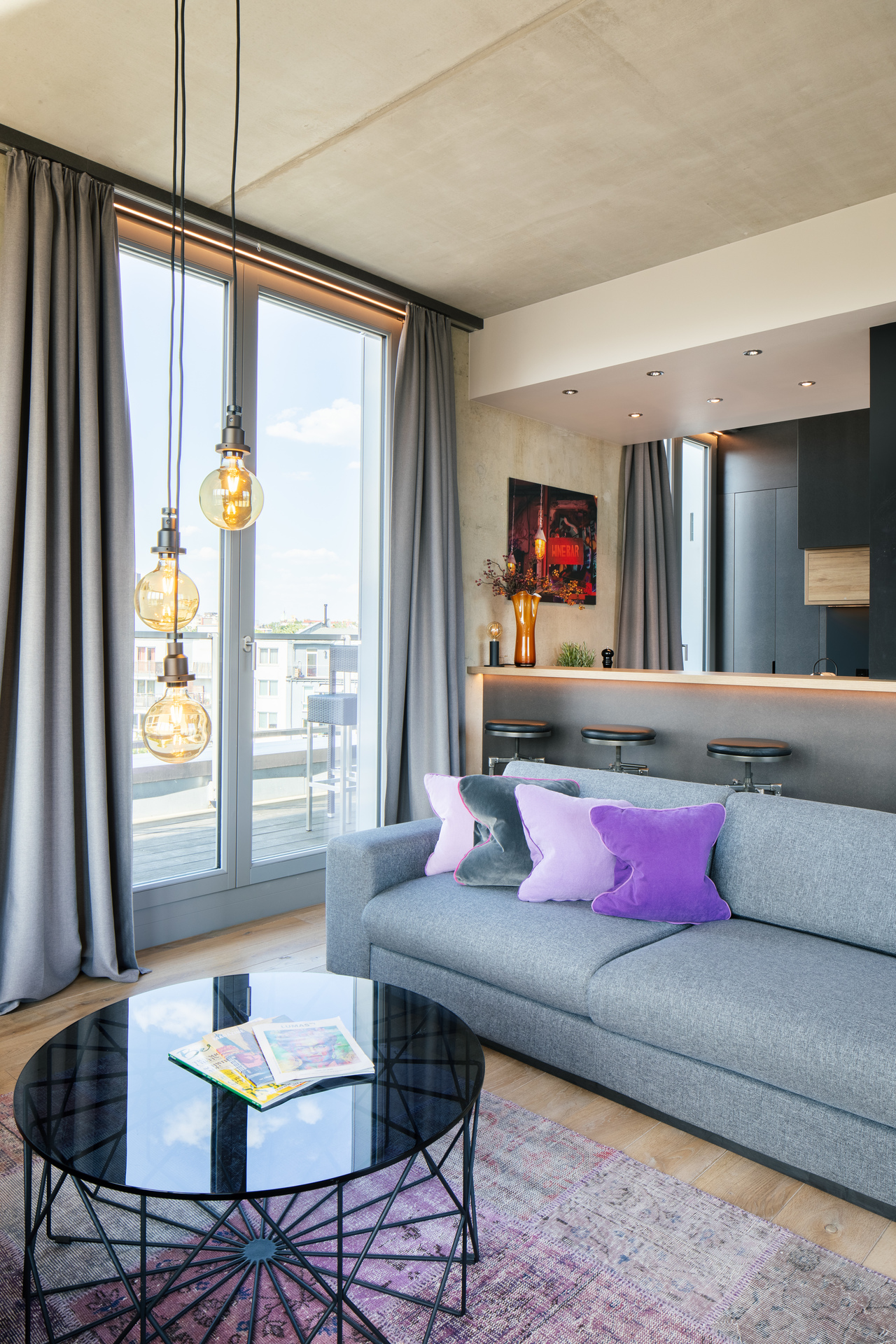 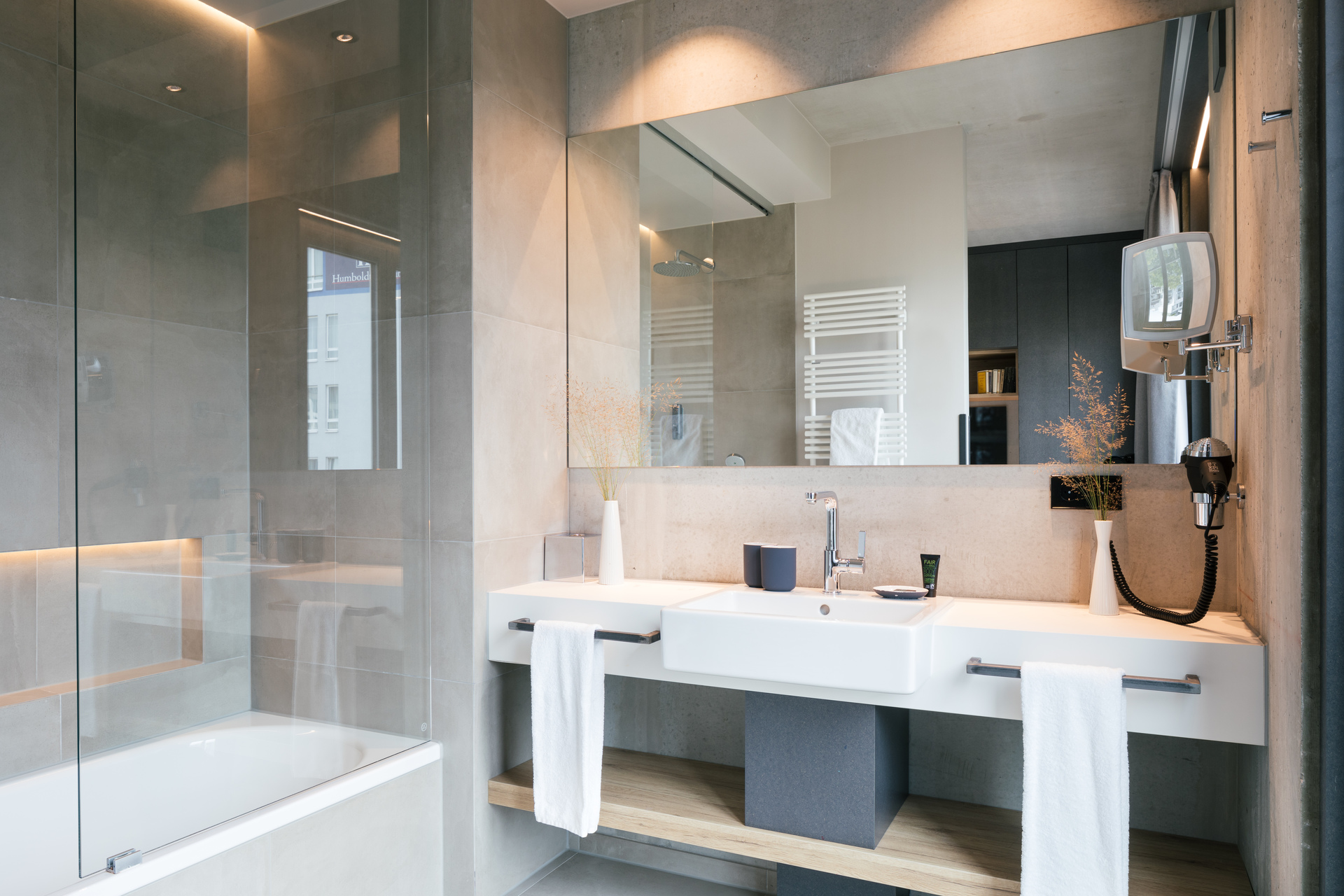 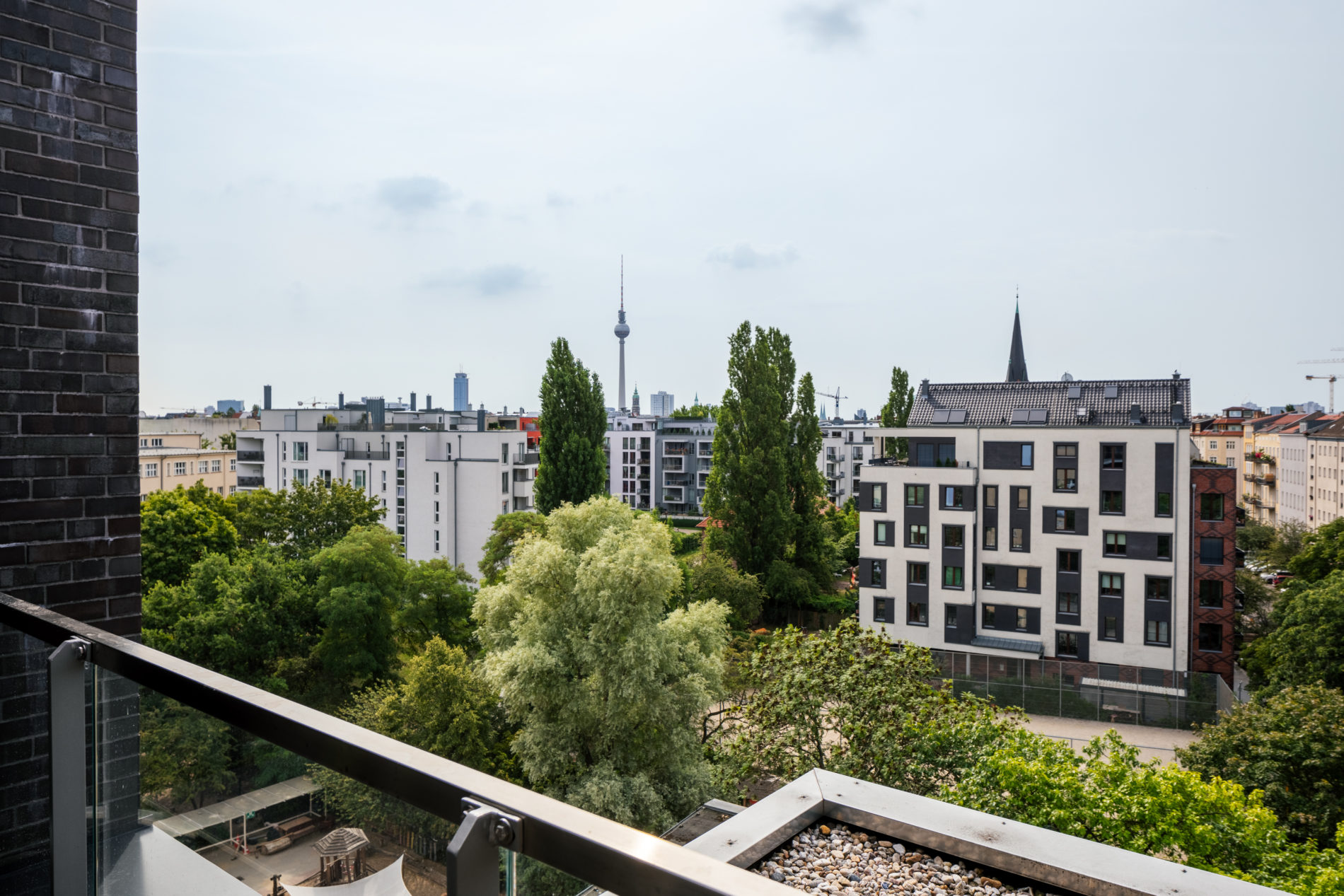 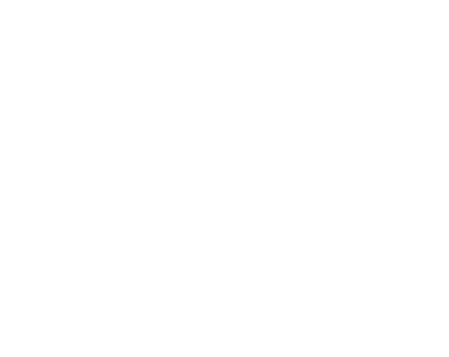 The interiors of the DOWNTOWN APARTMENTS combine a warm and homely atmosphere with all the modern quirks. Full-length windows and wooden parquet flooring add touches of grandeur to the otherwise understated but top-quality apartments. Thoughtful design including fully equipped kitchens mean that you’ll have everything you need, whether you’re there for a couple of nights or months. The loggias and terraces offer another living area with wonderful views out over the city.

One to suit everyone

The DOWNTOWN APARTMENTS Mitte are refuges of comfort and just minutes away from the centre of the capital. We offer a range of 27 fully furnished and serviced apartments for you to come back to and relax in: from a 36 sqm studio apartment, to generous family apartments with two bedrooms and bathrooms, to a 147 sqm penthouse with its dazzling terraces. Each apartment opens out onto a loggia or terrace, with views over the park and the cityscape beyond, reaching all the way to Alexanderplatz. 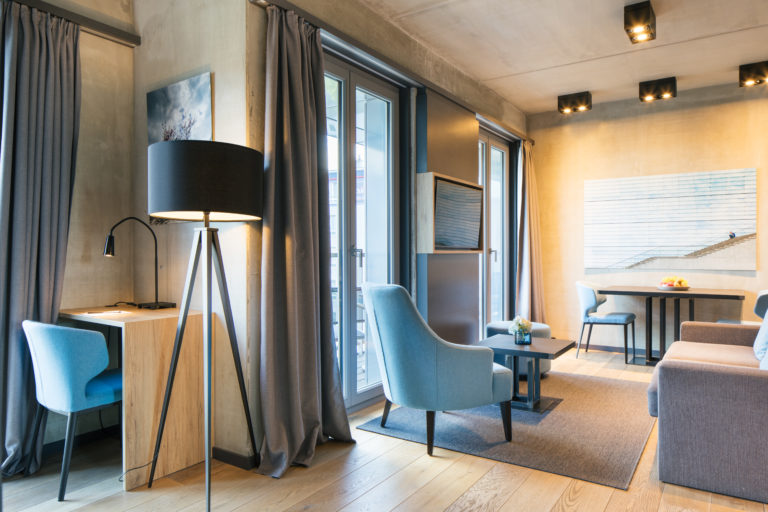 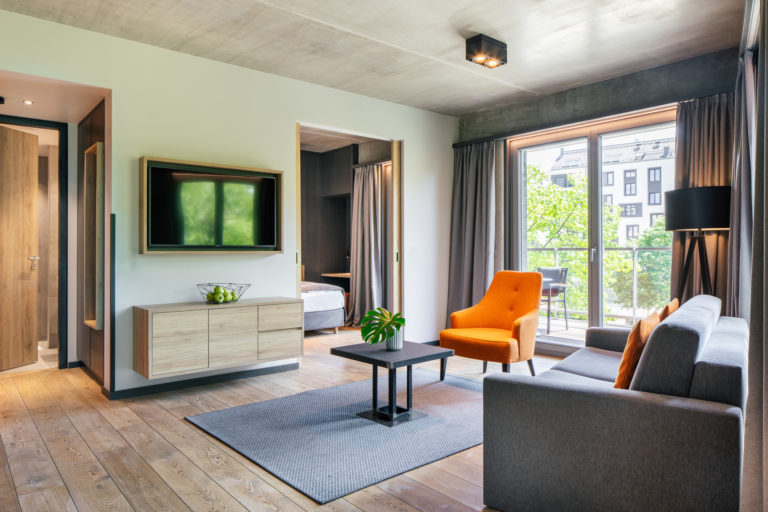 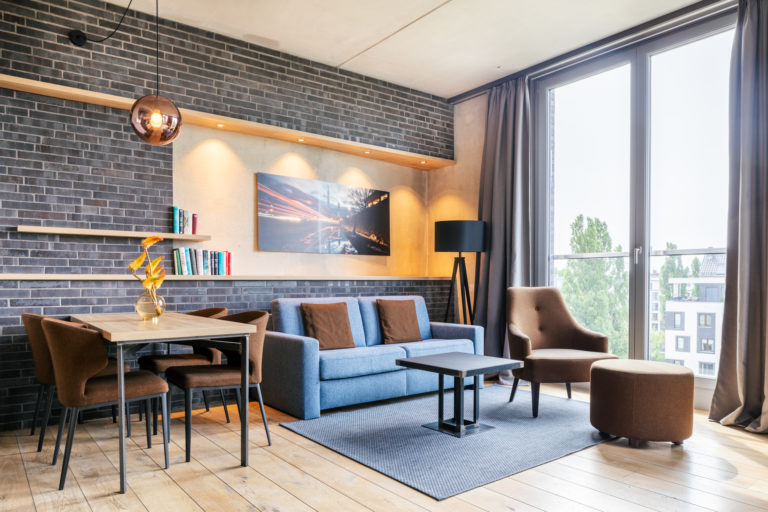 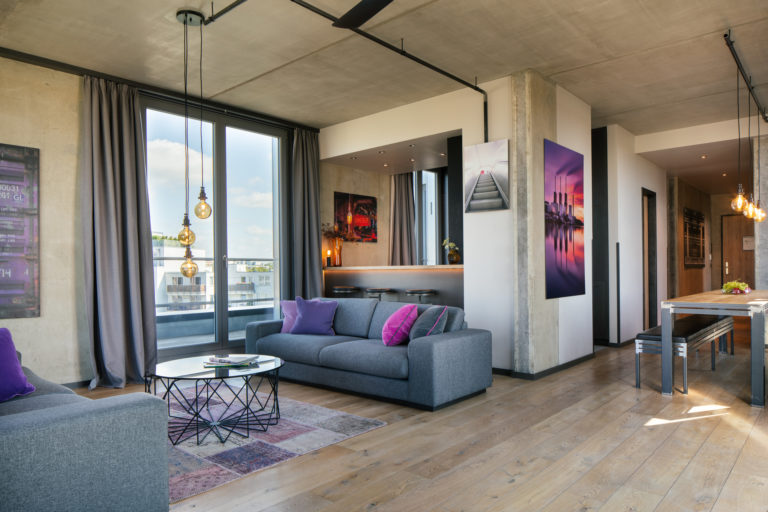 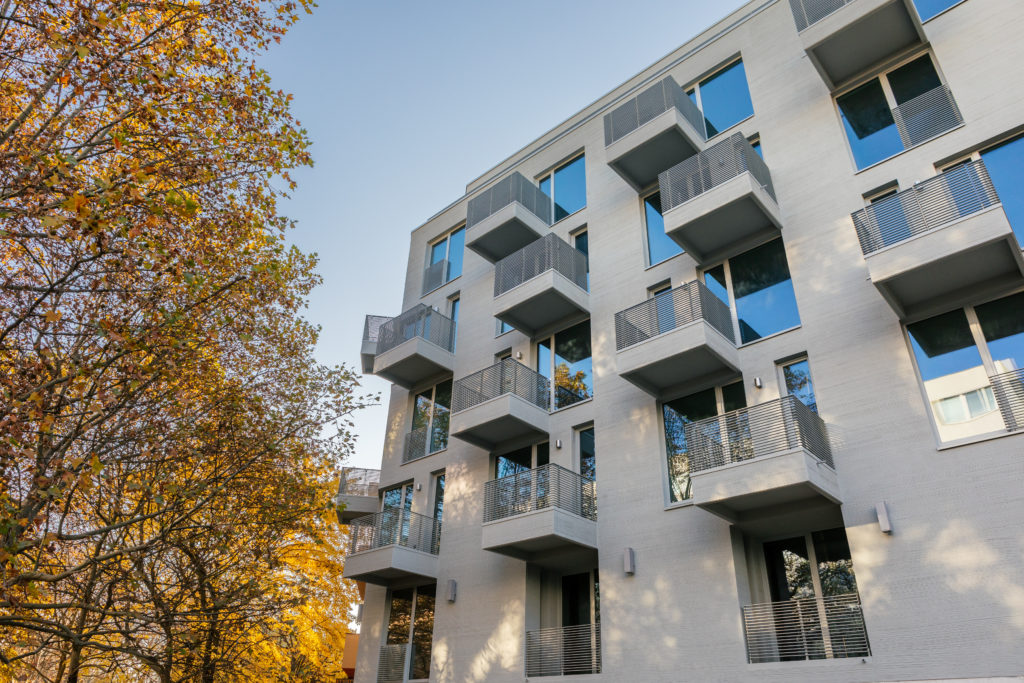 For every little comfort

So that you feel truly relaxed in your DOWNTOWN APARTMENT, the following services are provided free of charge:

Our concierge service is there for you every day from 8am to 4pm to help with any wishes or questions you might have.

Towels and bed linen will be changed weekly (during at least a four-night stay).

Our housekeeping service will clean your apartment once a week (during at least a four-night stay), which includes the kitchen. However long your stay, the final clean of your apartment is always complimentary.

A laundry room with washing machines and dryers for guests’ use located in the basement.

Our concierge service will try our best to fulfil all of your wishes. Please do not hesitate to get in touch with any concerns you might have about your stay, either by telephone or email, and we will address them as soon as possible.

For an additional change of towels and bed linen, we charge between €10 and €35 depending on the apartment category.

Our concierge service is happy to organise dry cleaning for you for an additional charge. Please make sure you allow enough time for this service.

Should you wish for an additional clean of your apartment, just let us know. We charge between €25 and €55 for the different apartment categories.

We currently do not offer a breakfast service. There are however numerous options nearby, and a delivery service is possible. Please contact the concierge for more details.

Combining an authentic neighbourhood feel, the enthralling history of the once divided city, and the pulsing heart of the avant-garde capital, Invalidenstraße is like hardly any other location in Berlin. World-class cultural highlights such as Museum Island or the Natural History Museum are just as easily reachable as numerous theatres and opera houses. The Berlin Wall Memorial can be found just around the corner. And for some lighter relief, explore the plethora of cafés, bars and restaurants in the area. Other favourite spots nearby include Torstrasse, Oranienburger Strasse, Rosenthaler Platz and Hackescher Markt. Countless ministries, businesses and shops are also located close to the apartments, as well as the campus of the Charité Hospital. 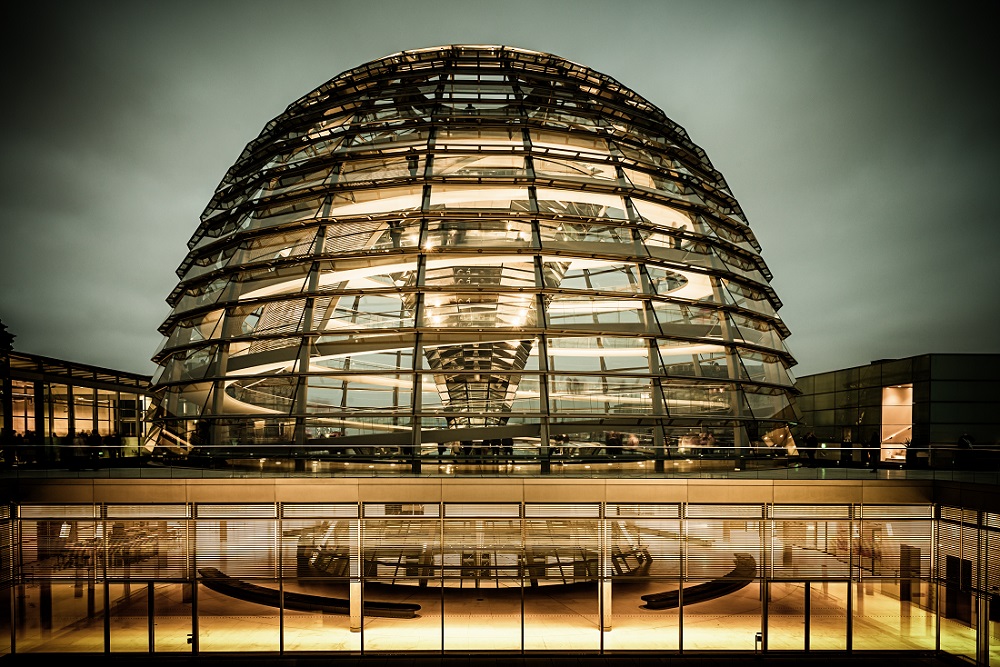 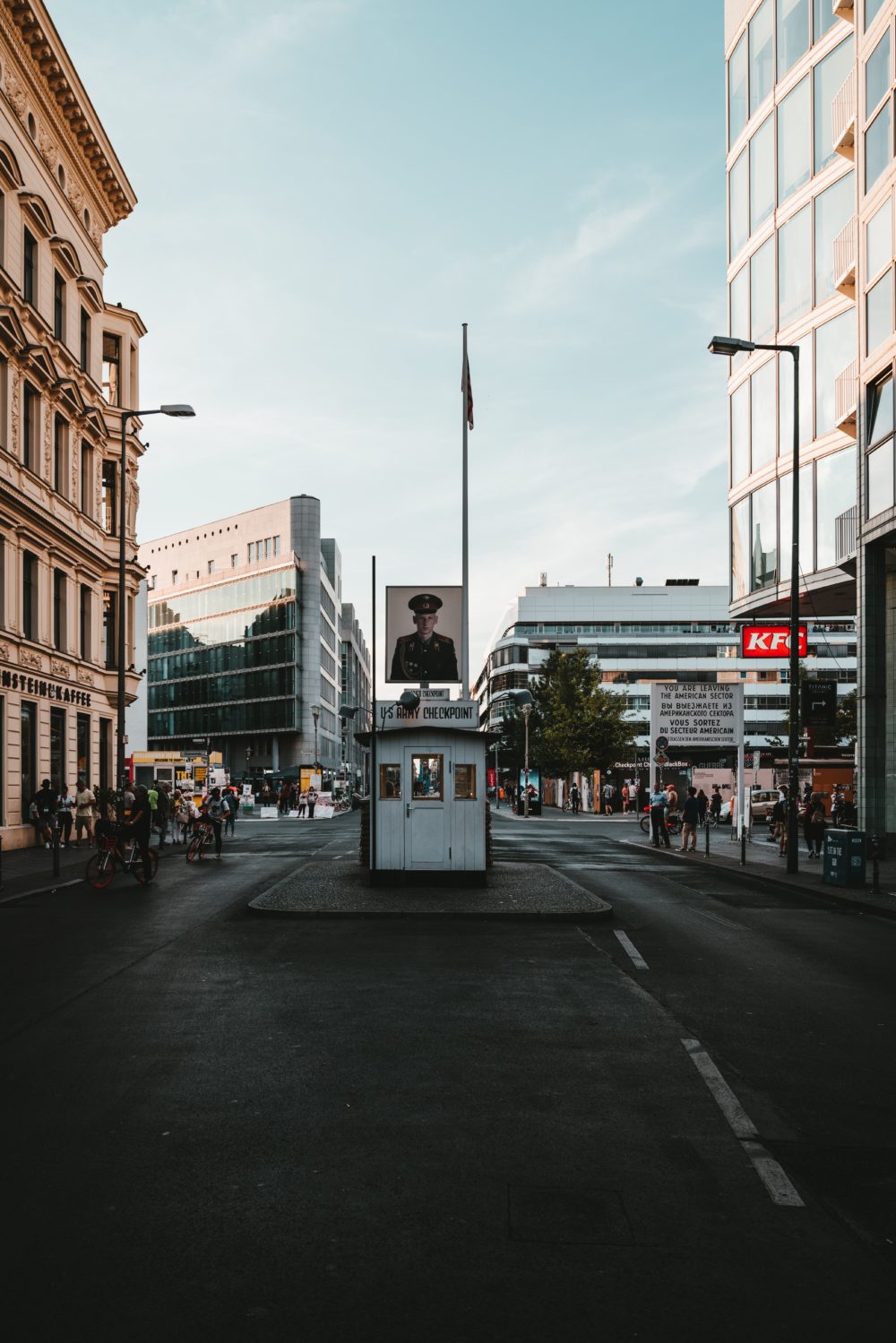 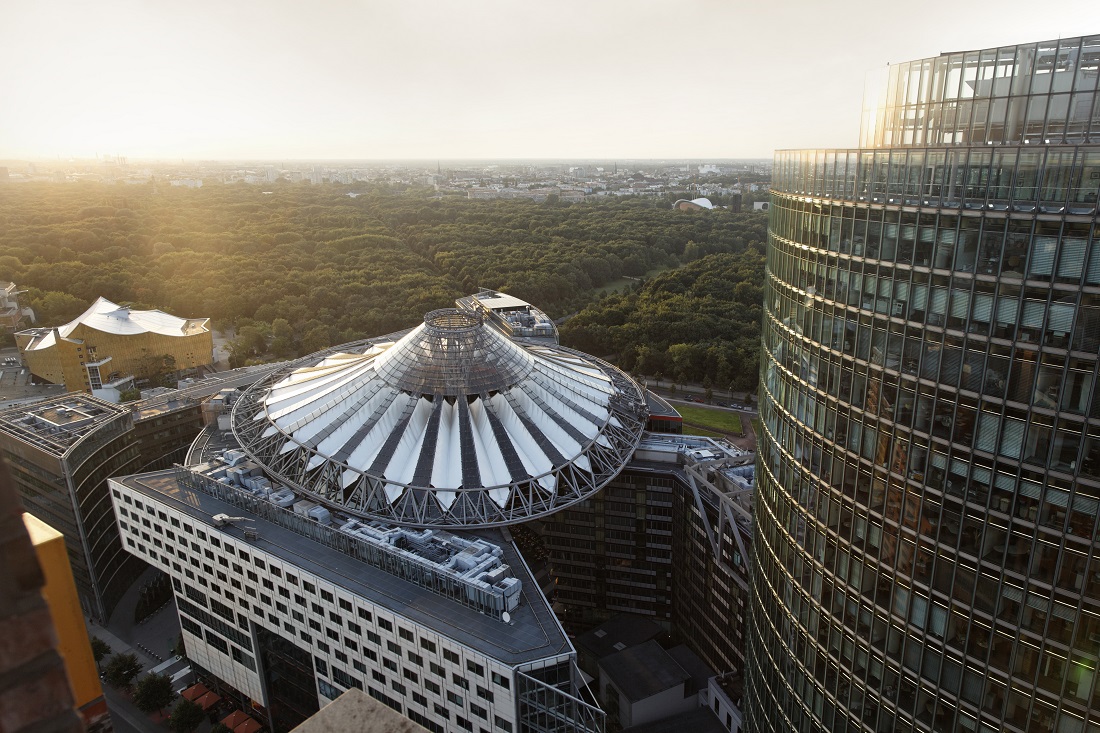 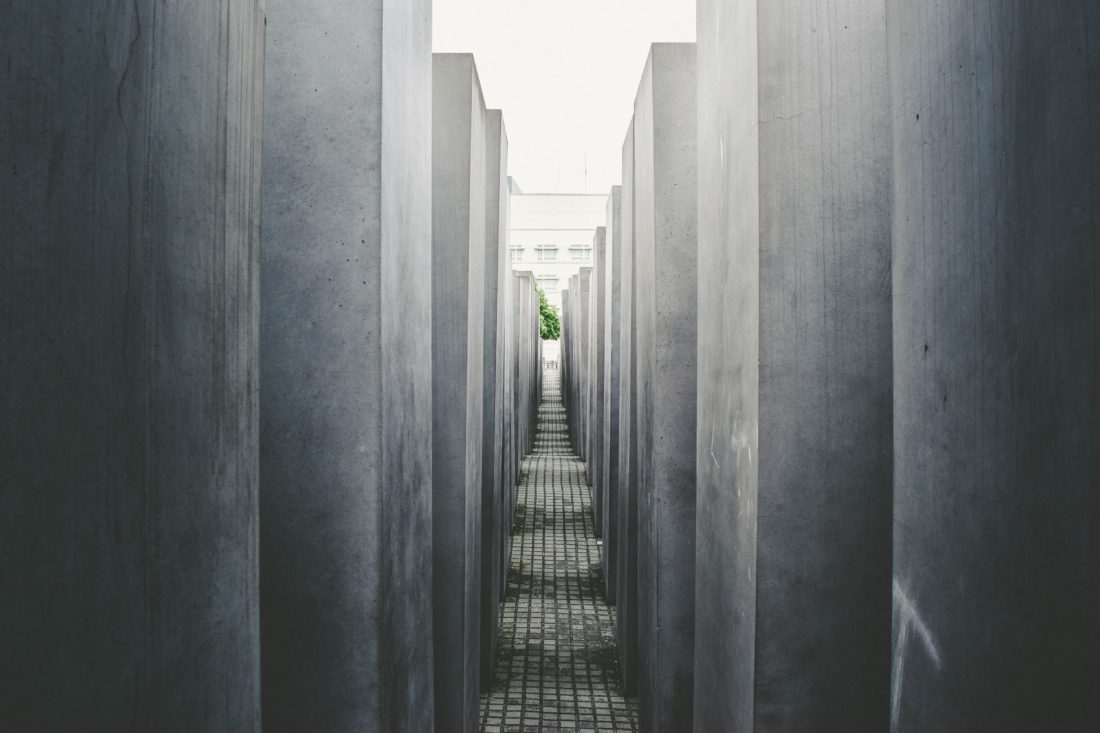 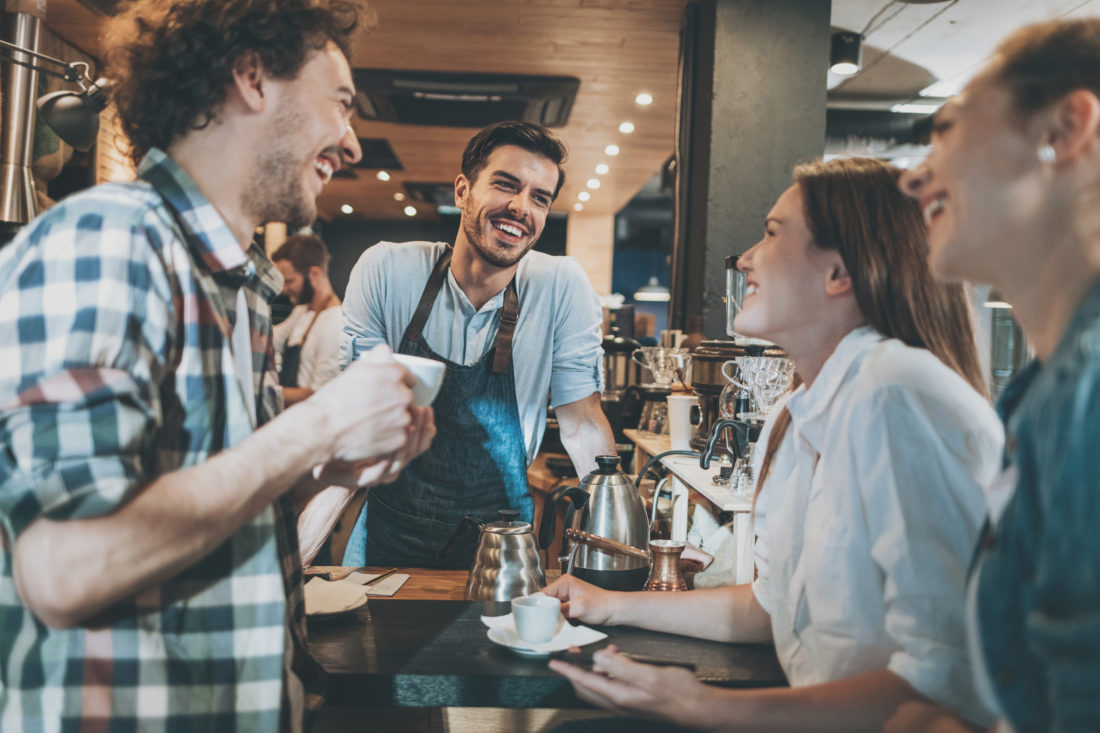 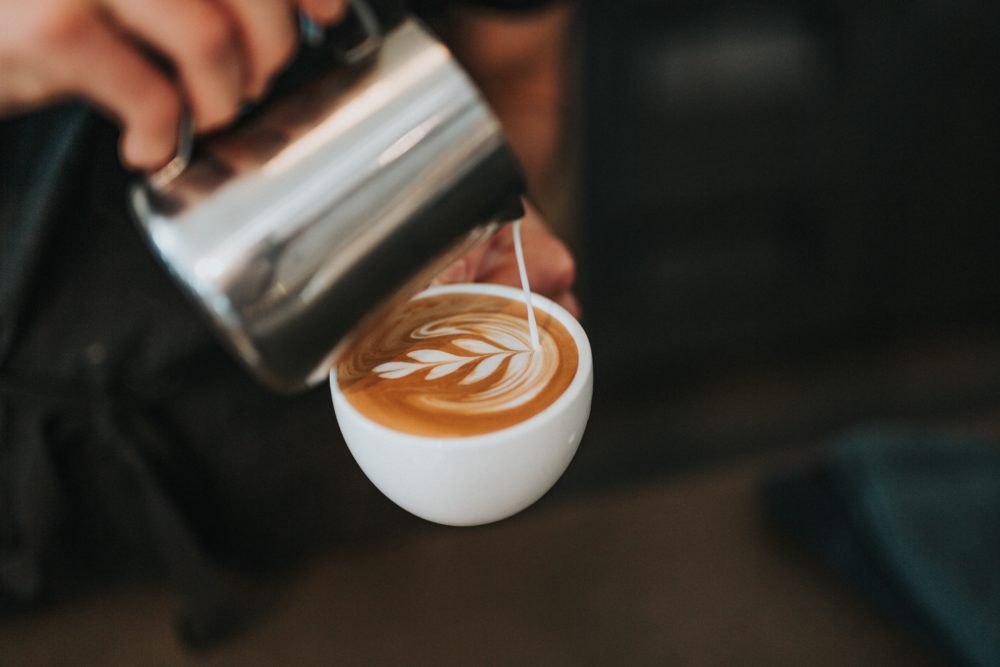 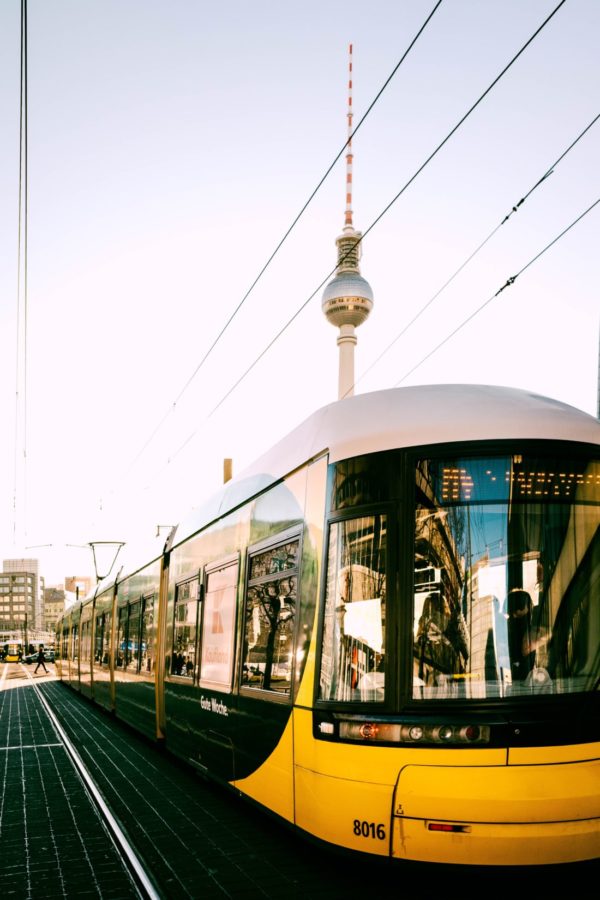 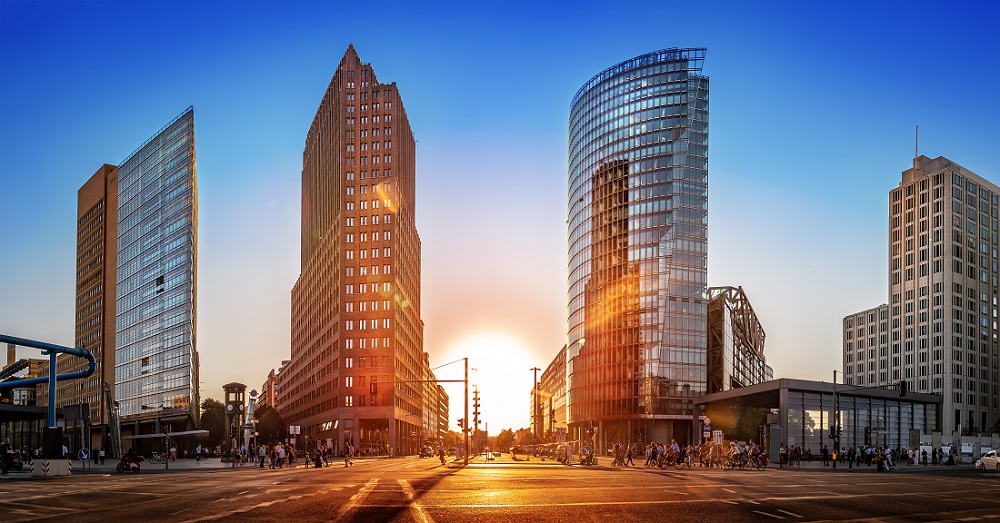 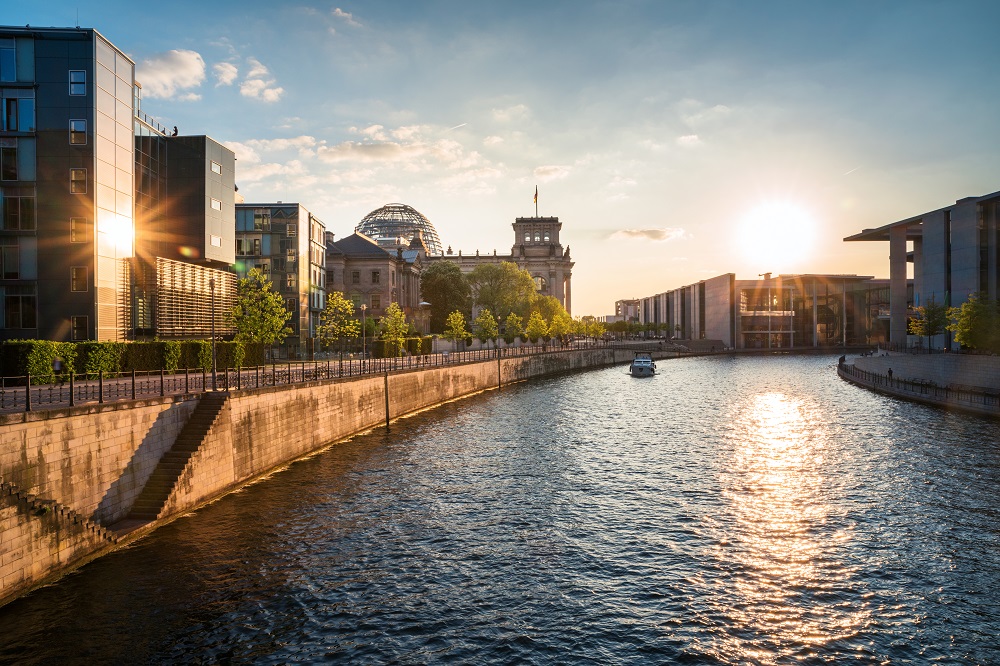 Many ways – one destination

Berlin currently operates out of two different airports. The central “Tegel” airport (TXL) is only around 20 minutes north of the Downtown Apartments and is easily reached by bus, train or taxi. The “Schönefeld” airport (SXF) is located south-east of the city and is only around 35 minutes away.

Just a couple of minutes away from the Downtown Apartments you will find the bus-stop for line 247, linking Leopoldplatz in Wedding to Ruppiner Straße in Mitte. There is also the night bus line N40, which runs from Wühlischplatz in Friedrichshain to Turmstraße in Moabit.

Berlin’s A100 autobahn is about a 15 minute drive north-west, whereas the A114, which feeds into the Berlin orbital autobahn (A10), can be reached in around 20 minutes. For an additional charge, we can offer you an underground parking space opposite the apartments.

Berlin’s Hauptbahnhof (main train station) is only a stone’s throw away from the Downtown Apartments, and the M8 and M10 direct tram lines stop right outside the apartments en route. The main-line stations Gesundbrunnen, Alexanderplatz and Friedrichstraße can all be reached within 30 minutes via public transport.